Kalettes, a combination of Kale and Brussels Sprout, taking healthy to a whole new level

Kalettes. A funny name for a serious vegetable.

The Kale bit in the name comes from the fact they’ve been grown using tender kale. The ‘ettes’ bit in the name is because they ’re ever so small and cute. Not cute in a puppy kind of way, but more in a Brussels Sprout way. Because every little Kalette leaf has the crisp crunch of Kale with the nutty taste of a Sprout.

What’s more, they contain the naturally grown goodness of both.

So, if you’re looking for a new vegetable that’s packed with ‘good stuff’ and tastes great, then boy, have we got a vegetable for you. After all, as they say; good things do come in little packages.

Honestly, the best way to discover the taste is to try them for yourself. But in the meantime, here goes…

When we say Kalettes are good for you, that’s an understatement. How very British of us to be so modest…

It’s not really a story, not in the fairy tale kind of way, but it does have a happy ending. Assuming you rush out and try some that is.

Nearly twenty years ago, some very smart men and women decided they wanted to grow a new variant of kale. One that had even more taste and had done away with the hard stalk that kale often has. Now, these foodies, also happened to work for the seed house, Tozer Seeds. Very handy.

Growing a new vegetable isn’t as easy as you may think. It can take an awful lot of trial and effort and even more patience. But eventually they hit on the perfect combination – kale crossed with Brussels sprouts. This blend allowed the best characteristics of each vegetable to shine. The crisp crunch of kale with the rich nutty favour of sprouts. It also looked good. Like a tiny cabbage with green frilly leaves and streaks of purple.

Today, Kalettes are showing the world that when it comes to vegetables, Britannia might not rule the waves, but we certainly rule the ploughed field. 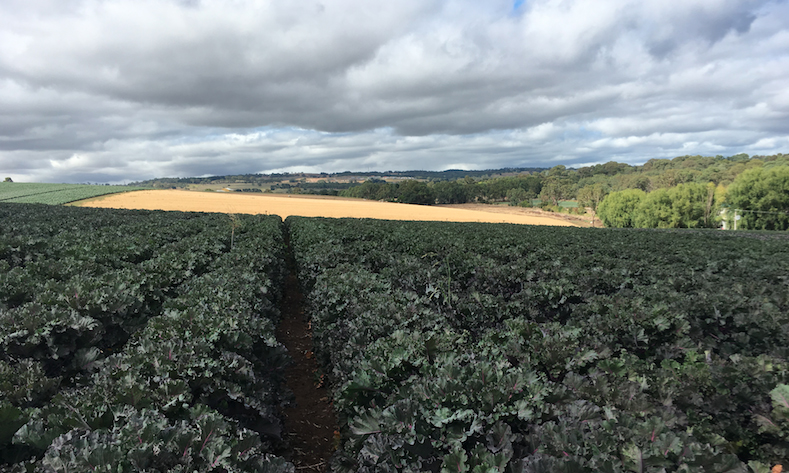 This message is only visible to admins.

Error: Error validating access token: Sessions for the user are not allowed because the user is not a confirmed user.
Type: OAuthException

Method
1.Trim, peel, and slice the red onion. Trim the dry, woody bases off the Kalettes®. Finely chop the three-cornered leeks.
2.Place a deep frying pan or wok on a medium-high heat. Add ½ tbsp olive oil and the gnocchi. Fry for 4-5 mins, stirring often, till the gnocchi are browned all over.
3.When the gnocchi have browned, scoop them out of the pan and set aside on a plate or in a bowl. Add another ½ tbsp olive oil to the pan and add the onion. Season with a pinch of salt and pepper. Fry, stirring often, for 6-8 mins till the onion has softened, but not browned too much.
4.Add the Kalettes® and three-cornered leeks to the onion. Drop in the thyme sprigs. Fry, stirring often, for 5-6 mins till the Kalettes® have softened but still have plenty of bite to them.
5.While the Kalettes® and three-cornered leeks fry, finely grate the zest from the lemon.
6.Pick the thyme sprigs out of the pan and discard them. Return the gnocchi to the pan. Pour in the soya cream. Cook, stirring, for 2 mins till the cream has warmed through.
7.Stir most of the lemon zest into the pan. Squeeze in a little lemon juice. Taste and add a pinch more salt, pepper or lemon juice if you think it needs it. Spoon the gnocchi and creamed Kalettes® into two warm bowls and serve with the remaining lemon, sliced into wedges for squeezing.

Share on FacebookShare on TwitterShare on Linked InShare by Email

Time is running out to stock up on our delicious Kalette's. In all good retailers now, with many on promotion...

Share on FacebookShare on TwitterShare on Linked InShare by Email

Time is running out to stock up on our delicious K

Kalettes with a little bit of chilli make the perf

Green For Go.... Have you tried the amazing Kalet

Love is in the air today 💚 Why not make Kalette

Spring Is Around The Corner – What’s In Store?

With the worst of winter hopefully now behind us, it’s fair to say that, as we hurtle towards March, Spring is on its way, with daffodils beginning to pop from the ground and tree branches just ready and waiting for new buds to emerge. So what sort of foodie treats and goodies does this mean […]

Exercising On A Vegan Diet

In the past, rumours surrounding a vegan diet have been abound. Off-putting stereotypes have flooded the airwaves and our minds have been filled with horror stories of lack of energy, malnutrition and nutrient deficits – none of which sound good in the first place, let alone being conducive to making exercise a regular part of […]

Christmas is a distant memory, the weather has turned that bit more miserable and its Monday……. As such, it’s understandable that you might be feeling a little low, but there are many ways to help cope with feeling a bit fed up and blue. Try the following tricks to help yourself feel better when the […]

On cold evening days and nights, when you can’t be bothered to cook, but you want something packed with taste, this Kalettes, chorizo & sweet potato hash is the answer. It’s also easy to replace key ingredients if you’re vegetarian or vegan.

These tarts are made for summer and picnics. Packed with flavour from the crumbly crust through to the cheesy, Kalettes filling these will become a firm favourite with everyone who tries them.

Where to buy kalettes

As more and more people discover just how good we are, so you’ll find us everywhere.

Not down the back of your sofa, but certainly in lots of shops.

Since 2010 you could buy Kalettes in Marks and Spencer from November until March. If you’re wondering why we’re not on sale all year round, the answer’s simple. It’s because we’re grown naturally and locally and we’re a seasonal veg. Being seasonal is something we’re proud of as it means we’re growing vegetables the way they’re meant to be grown.

But don’t worry about running out of Kalettes. Buy loads, then pop them in your freezer for use throughout the year.

Now you’ll find us in a growing list (sorry about the pun) of retailers from Tesco to Waitrose. In fact, anywhere that prides itself on offering its customers the best food.